The ACRP requires successful proposals submitted by journalists to be:

Relevance is of crucial importance for the ACRP to select proposals that closely adhere to its core ethos, i.e. the ACRP

…facilitates journalists to investigate complex dynamics and uncover untold stories, with an emphasis on on-the-ground impact and perspectives to illustrate how the lives of the people of Africa are changing amid the comprehensive phenomenon of Africa-China interactions.

The main objective is for journalists to investigate stories that illustrate how the lives of the people of Africa are being impacted, or how they themselves are shaping their own lives and futures. Usually proposals supported by the ACRP will employ the prism of Africa-China relations, i.e. the activities and impact of the Chinese government, companies, financiers and individuals in Africa, to conduct the investigation; but it is not in all cases a requirement to include an overt China angle or involvement. With the Public Health Reporting Grants in 2020, for example, the ACRP selected some proposals that did not have an explicit China focus but that closely adhere to the ACRP’s main objective as outlined above.

The ACRP’s identity, moreover, as expressed on its website is as “an African institution that supports Africa-China journalism that puts the interests of Africa and its people first”.

It is also crucial for a proposal supported by the ACRP to avoid a focus that is too wide or general, or too focused on political or academic matters (i.e. too far removed from ground-level impact). As per the ACRP guideline for reporting grants,

Preference will be given to proposals with a relatively narrow focus around specific projects or issues. Ambitious and broad attempts to analyse the overall effect of Chinese engagement should be avoided [and] where possible journalists should identify individuals or communities through which to tell the story. 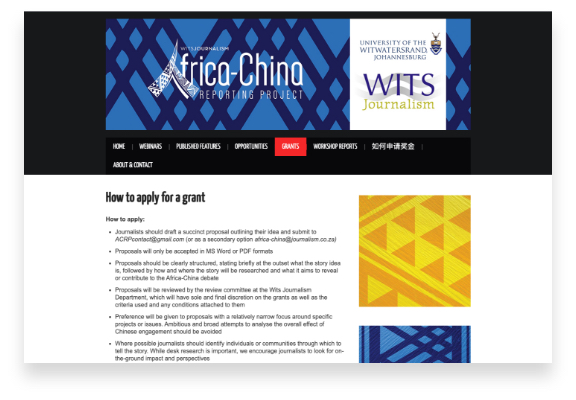 There is room for other organisations to support analysis of broad political issues and general trends in the Africa-China relationship, but the ACRP’s bottom-up approach is intended to explore Africa’s complex identity by enabling journalists to tell the continent’s stories and to enhance its development by facilitating a nuanced understanding of and optimal engagement with China – country by country, community by community, company by company. Hence it is essential for journalists to submit proposals to the ACRP that are indicative of issues and stories currently making an impact on ground-level Africa-China developments and interactions on the continent.

If a proposal adheres to relevant topics and is adequately focused, it is essential for it also to be well organised, avoiding irrelevant information or verbosity, but containing sufficient detail to make a coherent and persuasive case for the importance and feasibility of the investigation. The ACRP encourages journalists to start their proposals with an attention-grabbing headline that encapsulates the investigation and “sells” it to the reader, and captivates their attention. It should be clear and concise to illustrate why this investigation is important and relevant right now. This is not to imply that proposal headlines must be sensationalist to make a selling point, journalists are encouraged to maintain nuance in their storytelling and not make use of misleading headlines. Most proposals submitted to the ACRP are simply too short, i.e. one page or less, and hence cannot make a persuasive case. It is also helpful for the proposal to illustrate how the proposed investigation integrates or follows-on from prior reporting, either by the same journalist or by others.

It is advisable for journalists to base their proposals on some degree of prior research or investigation, or to display some familiarity with the topic and the specific issue at hand so that it can be framed appropriately within the local and continental context. In this way the journalist can also include additional selling points as to what important findings or information the investigation could unearth or what impact the investigation could bring about in the media that will inform and educate the public. Journalists can also include sources which they have already approached who will inform their investigation, and additional sources that they will be approaching and their relevance. One page is never sufficient to achieve this; the ACRP favours journalists who make a concerted effort with their proposals and who do not simply include a short description of the topic. It is important to strike the right balance between being thorough and detailed while also being concise and to the point.

Along with relevance and focus the other crucial component of a good proposal is the methodology. A strong methodology, i.e. a feasible and coherent plan for how the investigation will be undertaken, is absolutely essential as it illustrates that the journalist has grappled with the topic and is likely to make a meaningful media impact with the investigation.

Interviews are usually a large component of methodologies, but is not sufficient to simply state that a journalist will go to a certain place and conduct interviews. A detailed and structured investigation should ideally include specific people already identified for interviews, the type of interviews to be conducted and the questions and topics that will be addressed to them, and an outline for how the interviews will form part of the investigation.

In addition, a methodology should include specific places/regions/areas/sites that the journalist intends to visit and what they intend to do there. A methodology will also be strengthened immeasurably by an outline of other strands of investigation that will be pursued in addition to interviews, e.g. court records, archives, site visits, data analysis and (in rare cases) undercover work.

For the ACRP, a good proposal is one with a relevant topic adequately focused, and clearly and concisely laid out with sufficient supportive information, along with a detailed and coherent methodology.

When calls for applications are issued, journalists are requested to provide supporting documents usually including an up to date CV, a budget and a list of recently published work. Journalists can also enclose a cover letter of motivation or a letter of recommendation, but these are additional to requirements.

It is important that journalists update their CVs with their current and previous occupations clearly outlined. It is also essential in addition to the current occupation that CVs clearly present current location, full name and surname, contact details, gender and nationality of the applicant among other details such as qualifications and experience. It is also highly advised for all supporting documents to be named accordingly, i.e. with the format SURNAME, NAME, CV, and attached to an email (not typed in the body of the email) for ease of use and review.

Lastly, a proposal must include an itemised budget with a total amount within the required range of ACRP reporting grants (usually up to $1,500 but in certain specific cases up to $3,000). Proposals with budgets higher than the required amount cannot be accepted.

The following are four sample proposals, previously submitted by journalists to the ACRP and with all personal details removed, that can serve as guides for journalists on preparing suitably focused and detailed proposals: